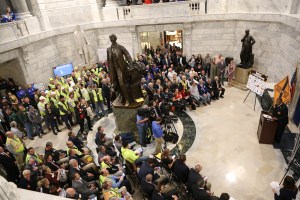 Business leaders, trade associations, chambers of commerce and government officials from across the state came together to rally urging lawmakers to pass a bill estimated to bring in an additional $453 million in funding for roads and bridges on Tuesday. 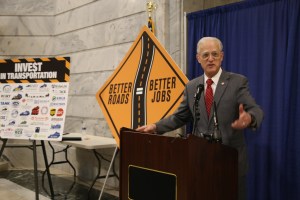 State Sen. Ernie Harris spoke in support of the bill stating he feels this is the most important piece of legislation that will be dealt with this year and its passage is vital. Harris added he has been supporting this concept for many years as he said the need is great across the state. 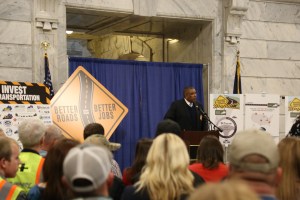 Kentucky Chamber of Commerce Board Chair Nick Rowe of Kentucky American Water said the broad coalition backing this effort and asking for passage of House Bill 580 know how important transportation is to all Kentuckians. He noted how critical the needs are ranging from county roads unable to support school buses and deficient infrastructure causing issues for businesses like UPS and Amazon.

Rowe stated the coalition knows the legislature and the governor have what it takes to get this done in 2020 and reminded lawmakers they have a large group from both sides of the aisle backing them in taking this crucial vote. 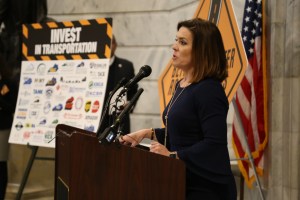 According to Carolyn Bonifas Kelly, Director of Communications & Research for TRIP (a national transportation research nonprofit), “Roads and bridges that are deteriorated, congested, or lack some desirable safety features cost Kentucky motorists a total of $4.5 billion statewide annually due to higher vehicle operating costs, traffic crashes, and congestion-related delays.”

LaRue County Judge-Executive Tommy Turner said if there was ever a time to pass a bill like this, it is now. He said transportation is one of the main and most important government functions and gives life to the Commonwealth, adding failure to act would lead to crisis.

“Counties are counting on this additional funding to make their communities safer,” Lewis County Judge-Executive Todd Ruckel said. He encouraged the legislature to pass the bill and commit to investing in Kentucky’s future. 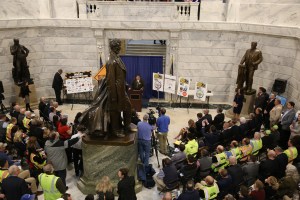 Versailles Mayor Brian Traugot said every dollar a city spends out of their own budget – because of a lack of support on transportation funding – is a dollar that doesn’t go toward other critical quality of life issues. Mayor Traugot added that the agreement between cities and counties in House Bill 580 is an important step in being able to continue to improve communities.

House Bill 580 has been filed in the House and awaits a vote in committee.