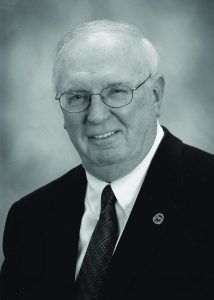 The late Frank Hamilton was a leader in Crushed Stone Industry for his entire career. Frank graduated from the University of Kentucky College of Engineering. For the majority of his professional life, he managed and operated Nally & Gibson Georgetown, a significant crushed stone producer located in Georgetown, Kentucky. In addition, he was a founding partner in Hamilton-Hinkle-Ruth Paving Company which later became Hamilton-Hinkle Paving Company. This company was also based in Georgetown. For a number of years, Frank operated a concrete Ready Mix Company in conjunction with Nally & Gibson.

Frank was devoted to the Highway Industry in Kentucky. He served as  chairperson of the Kentucky Crushed Stone Association in 1976 and 1988. Frank worked tirelessly through the years to promote the industry. He spent countless hours in Frankfort working with the Kentucky Legislature and the Kentucky Transportation Cabinet to help improve Kentucky’s Highways and Transportation System. His company was the primary supplier of aggregates and asphalt in the development of the Toyota Manufacturing Facility in Georgetown and he continued to supply construction materials and perform work for all the Toyota expansions.

Additionally, Frank’s company was a major contractor for work performed on I-75 and I-64 as well as for all new construction performed in and near Georgetown. Frank was the epitome of integrity. He treated his customers, his employees, his partners, and his competitors with respect. When Frank told you something, you could count on it.